MURIEL GRAY QUESTION: Why are booksellers around the world advertising a non-existent book for sale?http://hewasanutter.com/The-Ancient-2000-IS-A-FABRICATION.html

MURIEL GRAY QUESTION: How can a non-existent book have an ISBN number? http://hewasanutter.com/The-Ancient-2000-IS-A-FABRICATION.html

MURIEL GRAY QUESTION: HarperCollins know of the non-existent book dated 2000 but did not reply - why not?http://hewasanutter.com/Deception-Exposed.html

MURIEL GRAY QUESTION: Can anybody help in tracing the origins of the deliberate deception?http://hewasanutter.com/Deception-Exposed.html 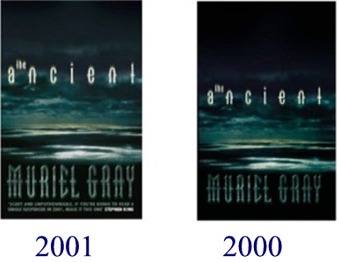 An "Anonymous" blogger informed me that 'The Ancient' was published in 2000 - NOT 2001 as I have stated. "Anonymous" directed me to the websites of Alibris and Amazon. To my utter amazement I saw that Ms Gray's book dated 2000 is advertised for sale in Canada, Australia, USA and UK, it has the ISBN 9780002243810.

This is a matter that has occupied a great deal of my attention over a period of ELEVEN years - I had never seen the date of 2000 in any connection with "The Ancient." [It made no difference to my claim - as I have said I have "incontrovertible proof of the date of 1998."] But I was suspicious, and so I decided to investigate.

I do not know how the system of selling books over the internet works - I would appreciate hearing from anybody who can explain to me how a book that is not registered with any known authority can be advertised for sale with a valid ISBN number but an incorrect date. Would one need connections within the publishing industry?

The ISBN number 9780002243810 has never been used for any book dated 2000 therefore sellers appear to be unknowingly displaying false information regarding the date on the internet.

Further;-
Here are some of the links to webpages advertising 'The Ancient' 2000;-

When a book is published, by law a copy has to be deposited with a repository, eg. in the UK it is the British Library, in the USA the Library of Congress, viz;-
Neither of the above repositories lists "The Ancient" dated 2000.
Neither lists the ISBN 9780002243810.

(Here is the link to the above record).

The question has to be asked, "Why are booksellers listing 'The Ancient' as 2000?"

I wrote to the booksellers, I said that I would like to purchase a copy of 'The Ancient' but could they please ensure that it was dated 2000. All the replies I received informed me that their copies were dated 2001.

I then tried to find out from the sellers why they had incorrectly dated this book at 2000 I did not receive any response - theremust be a trail leading to the origins of the 2000 date. If anybody could tell me how I can follow it I would be most grateful.

I gave HarperCollins the details of the above, that one of their books was on sale, around the world, with an incorrect date attached to it. They chose not to comment.

Popular posts from this blog

May 05, 2010
A discussion regarding the issues reported in 'he was a nutter.com' Before adding to this blog please could you ensure that you have read my "COMMENT TWO"
Read more

May 31, 2010
An "Anonymous" blogger informed me that Ms Gray's book 'The Ancient' was published in 2000 - NOT 2001 as I had stated - it is advertised for sale on the internet around the world dated 2000. I was suspicious. I have investigated and have been able to prove that the book dated 2000 does not exist. Check out 'The Ancient 2000 does not exist'
Read more

May 15, 2010
I have added to my website regarding the date of my work, check out http://www.hewasanutter.com/proof.html . If Muriel Gray would like us to return to court and show the evidence of the dates of our work I am happy to do so - that is what I wanted when I issued my claim against her. I have stated some of the dates I am able to prove, they include 1998 and 1994. I have not provided the full detailed evidence of those dates, the internet is not the forum for me to engage in a matter of evidence - evidence that should have been examined in court.
Read more